This section will explain the meaning of the Confidence Interval (CI) in statistical analysis. The calculations will be shown for the:

Most common confidence interval selections are 90%, 95%, or 99% but are dependent on the voice of the customer, your company, project, and other factors.

Sample statistics such as the mean, standard deviation and proportion (x-bar, s, p-bar) are only estimates of the population parameters.

Confidence Intervals are used to quantify the uncertainty by providing a lower limit and upper limit that represent a range of values that will represent the true population parameter with a specified level of confidence.

Alpha-risk is known as the significance level; the probability of being making an incorrect decision, in other words, being wrong.

Confidence level refers to the percentage of probability, or certainty, that the confidence interval would contain the true population parameter when you draw a random sample repeatedly.

In regression analysis, the CI is based on a provided value of X for a given level of confidence. This CI is likely to contain the true best fit line.

There are three factors that impact the confidence interval:

CI's are used when you are unable to capture and analyze an entire population (census) and the sample (statistics) to infer statements about a population. The larger your sample size, the more confidence one can be that their answers represent the population.

Though the relationships are not linear, the larger the sample size the smaller the confidence interval (in other words, the more confident you can be that it the true population parameters will fall within a tighter spectrum or tighter distribution).

The size of the population is a factor when working with a relatively small and known group of data (such as the number of pieces of candy in a bag versus the number of fish in the ocean).

The CI calculations assume you have a true random sample of the population. If the sample is not, then one cannot rely on the confidence intervals calculated because you can no longer rely on the measures of central tendency and dispersion.

Sampling plans are an important step to ensure the data taken within is reflective and meaningful to represent the population. Click here for information regarding sampling plans.

The accuracy of the CI also depends on the percentage of your sample that picks a particular answer. If 99.9% of the parts sampled PASSED and the 0.1% FAILED, the chances of error are very low regardless of sample size.

However, if the percentages are 51% and 49% the chances of error are much greater. It is easier to be sure of extreme answers than those aren't, thus the interval is not linear.

Let's go over jargon used within this topic. You'll see a lot of terms used when learning about confidence intervals, risks, samples, populations, and the following tries to connect all the dots and show you how these terms are related.

A point estimate is:

The sample standard deviation (s) is an unbiased estimator of σ

The sample variance (s2) is an unbiased estimator of σ2

The sample mean (x-bar) is an unbiased estimator of μ

The sample proportion (p-hat) is an unbiased estimator of P

The Confidence Interval is an interval estimate that provides more information than just a specific number like the Point Estimate.

The Confidence Interval provides information of variability around a point estimate. You can never be 100% confident when using a sample from a population.

If using a 95% CI, this is saying that from repeated samples from the same population, 95% of all the confidence levels that can be generated will contain the true population parameter.

Confidence Interval for the MEAN

Assuming the population distribution is normal, or you have a very large sample size of a non-normal distribution and:

The CI for the mean for the following two examples:

which is another way of saying the CI

A sampling of 22 patients in the emergency room showed they waited on average 45 minutes. From the past data we know that the population standard deviation is 5.8 minutes.

Estimate the 99% confidence interval for the average wait time of the patients. Assume population is normally distributed.

The critical z-value is 2.58 for 99% desired confidence level.

What does this tell us?

With 99% confidence, the true population mean for the wait time is between 41.81 minutes and 48.19 minutes.

Although it's possible the true mean may not be within these values, 99% of the confidence intervals generated in the manner will contain the true mean. 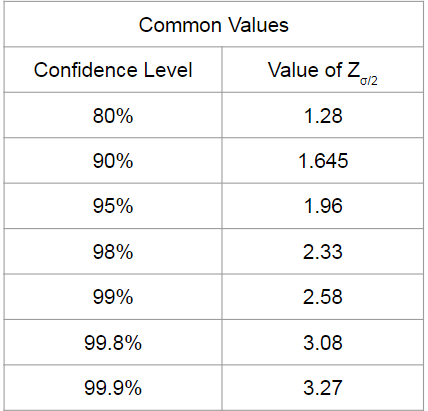 The critical t-value from the table using two tailed is 2.831
Remember to take the ∝/2 when using the t-table.

What does this tell us?

This is telling us that the point estimate of the average wait time is 45 minutes with an error of +/- 5.8 minutes. There is 99% certainty that the interval {41.5 minutes to 48.5 minutes} contains the true process mean. There is a 1% chance that this decision is wrong.

What would happen to the width of the CI if you selected to use only a level of 90%?

Think about what is occurring. You are willing to accept a much lower level of confidence that the interval will contain the true population mean (the actual waiting time of all patients coming into the emergency room), so you can tighten the range of values.

If you want to nearly guarantee that your interval contains the true population mean, then you would want to include every value in the interval, so the interval spreads as the level of confidence desired increases.

You can use Excel to find only the CI for a population mean. The population standard deviation must be known. You must determine the sample mean (x-bar) for the result to make sense and using 95% confidence level.

Suppose you have the following data:

The data would be entered in as shown and the result is 2.44 as shown in cell A1.

Confidence Interval for the STANDARD DEVIATION

The chi-squared distribution is not symmetrical and each varies according to the degrees of freedom, dF.

This technique lacks robustness, in that it is very important that the population is known to be normally distributed when using it to estimate the population variance or standard deviation.

Many business decisions involve population proportions such as estimating market share and proportions of goods that are acceptable or defective.

A survey was conducted on 300 emerging, domestic, small capital companies and found that 153 had an Emergency Action Plan that detailed reaction plans to maintain operations and customer service in the event of major illness or outbreak such as the swine flu.

Calculate the 92% confidence interval to estimate the proportion of emerging domestic, small capital companies that have an adequate Emergency Action Plan.

The "approximate" method is shown in the calculation below which uses the z-distribution. The exact method uses the F-distribution and that formula is shown further down this web page.

The CI states that with 92% confidence, the proportion of all similar companies with the plan is estimated to be between 46% and 56%.

To determine the CI for process capability use the formula provided below where:

Pp is a process index that numerically describes the long-term capability.

Both Cp and Pp are a function of the process standard deviation, not a nominal (target) value that may be historical or provided by the customer. 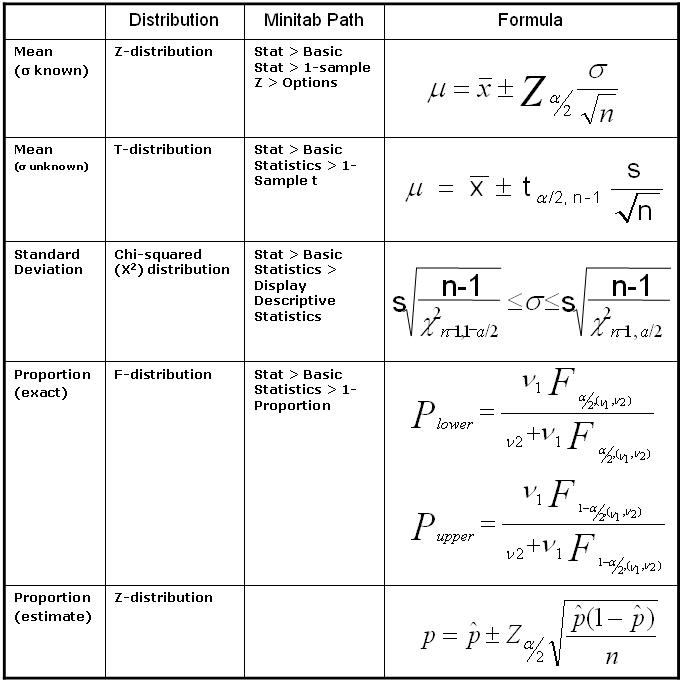 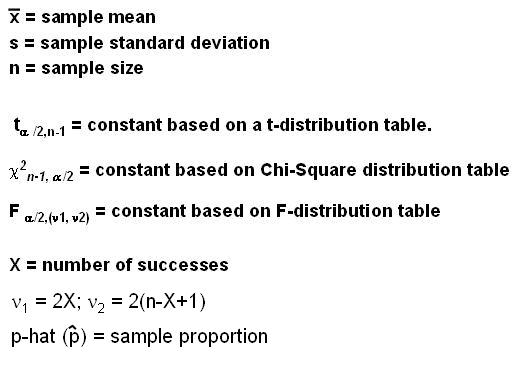 There are a few reasons a confidence interval could be asymmetric:

Confidence Level refers to the percentage of probability, or certainty, that the Confidence Interval would contain the true population parameter when you draw a random sample repeatedly.

Relationship with Margin of Error (ME)

The Margin of Error is a component of the CI calculation - see the visual aid below. Click here to review the entire module on the topic of Margin of Error. 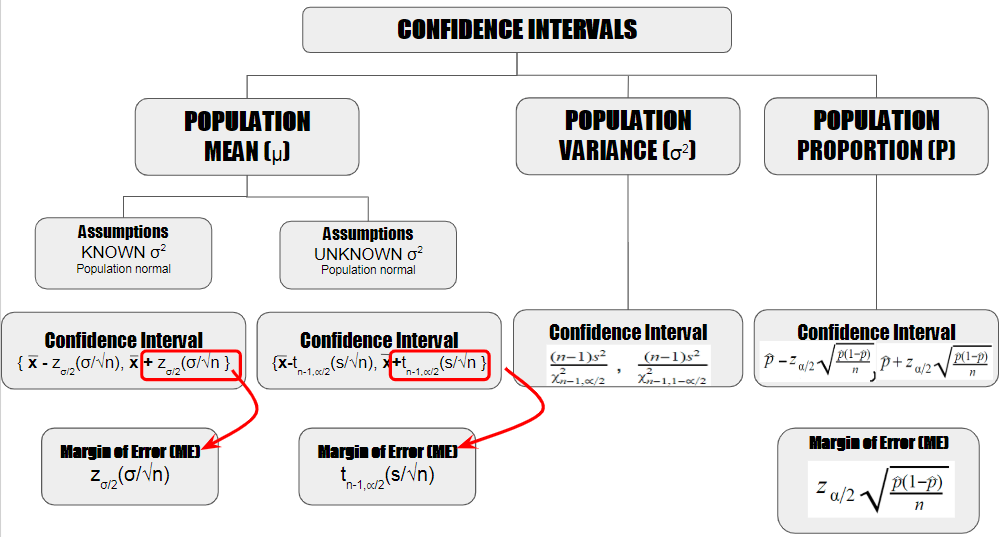