Components of a Histogram (Frequency Chart)

The histogram, when made up of normally distributed data, will form a "bell" curve when a smooth probability density function is produced using kernel smoothing techniques. This line that generalizes the histogram appears to look like a bell.

To assess the data there should be at least 5 bars or intervals and at least 30 data points.

There are a variety of histograms with some explained below. This is also a useful visual tool to depict the skewness and kurtosis of a distribution.

This may occur if a customer has requested the process run at towards the upper specification limit as opposed to targeting the mean.

The measure of central location is the median.

The distribution of the data reaches far out to the right side. This may be caused by a process having a lower boundary. Cost or time plots commonly exhibit this behavior.

The measure of central location is the median.

If most common value is 10, the middle most value is 15, and the average of the data set is 20, then the distribution is right skewed.

When testing a data set such as this (or left-skewed), for normality, it is like to have a p-value = 0. This means it is very likely the data are not from a normal distribution. You can transform the data, such as using a log transform. If the transformed p-value is >0.05 (or your chosen alpha-risk) then proceed with a parametric test. You cannot do this for bi-modal data. These data must be separated and analyzed separately.

The plotting of Salaries is an example that typically follows a right-skewed distribution since most salaries are centered on a the median but there is a long tail to the "right" that represents the few much higher salaries.

These histograms appear to have two or more (polymodal) behaviors occurring in one process and appear to have two points of central location. This can be caused by two sets of data being analyzed as one that are from different populations such as plotting the heights of females and males as one distribution.

The distribution is flat or not exhibiting much of a bell shape and has no appearance of a central location. This may occur when all values between a lower specification limit (LSL) and upper specification limit (USL) are weighted equally acceptable. In other words, values very close to the limits are as a good as a value in the middle.

Click here for more information on the Uniform Distribution.

Points are evenly distributed among a central value or location.

The mean is used to describe the central location of distribution. The median, mode, and mean are all close to the same value AND the Coefficient of Skewness is close to zero.

Click here for more information on the Normal Distribution.

The plots below depict a regular and a cumulative histogram of the same data. The data shown is 10,000 points randomly sampled from a normal distribution with mean of 0 and standard deviation of 1. The x-axis labels are represent the z-scores.

Notice the cumulative histogram gradually increases to 10,000 (to represent all the data points) and the ordinary histogram shows that data points as they fall into certain data intervals. 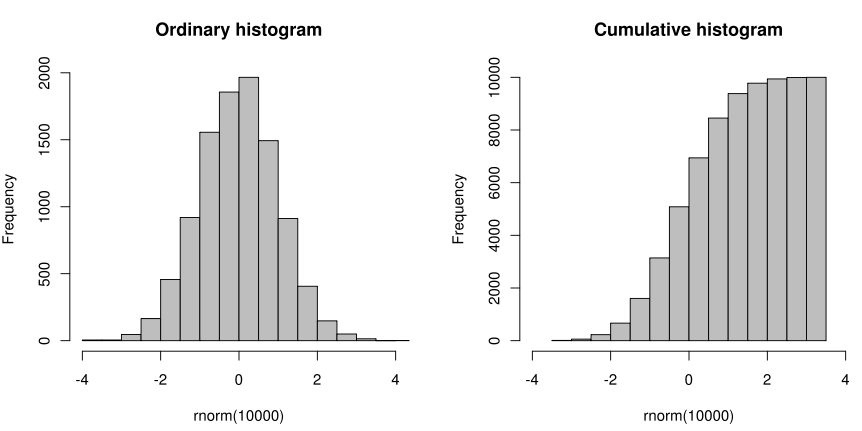 Karl Pearson is credited with developing the formula below to measure the Coefficient of Skewness. The formula compares the median with the standard deviation of the same distribution.

Creating a Histogram in Minitab 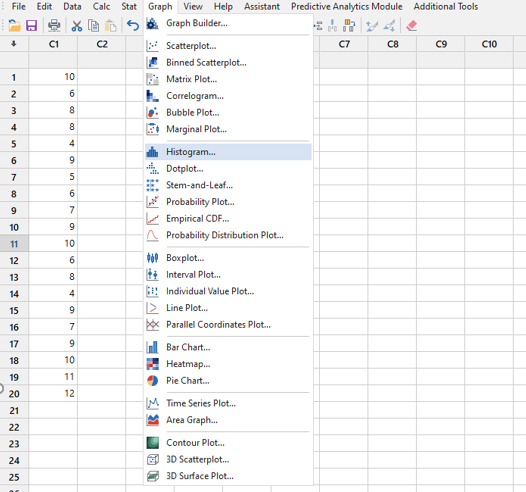 Upon selecting 'Histogram' there are a bunch of options and selections to choose if you wish. In the example below, we choose the date in C1 and select 'OK'.

Notice the very basic information is shown where the mean is 7.9 with a standard deviation of 2.245 among the 20 samples. 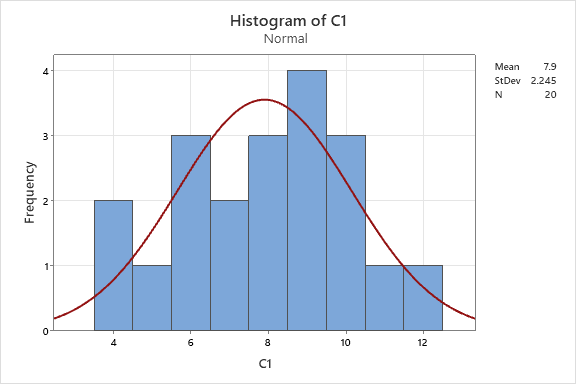 Going a step further. Let's assess normality. It appears to be normal based on the eye test but go to STAT > BASIC STATISTICS > GRAPHICAL SUMMARY to dive further.

Enter 'C1' in the Variables box and choose a Confidence Level (default is 95.0%) which represents an alpha-risk of 0.05. 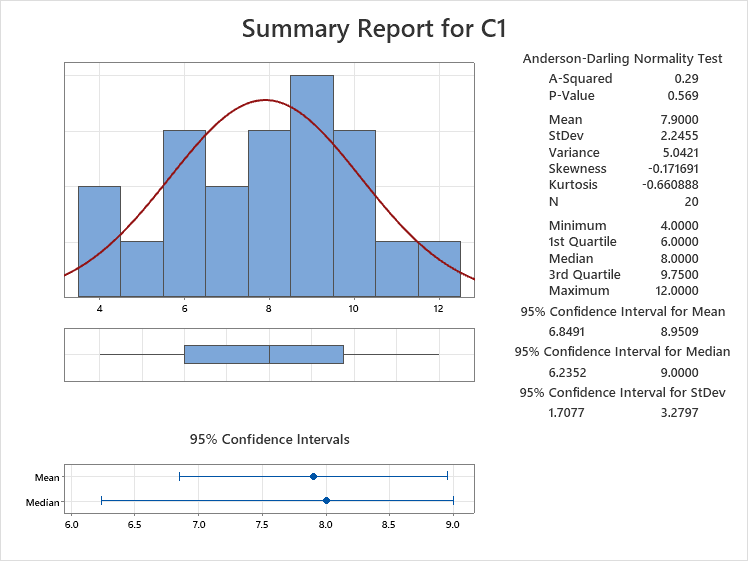 Draw your attention to the P-value which is 0.569. This is much higher than the alpha-risk chosen of 0.05 so the data can be assumed normal. Notice the mean and median are very close which is another good sign to assume normality

For good measure, if it is practical and possible, gather 10 more samples for a total of 30 and rerun these steps.

Some distributions will not meet the assumption of normality; they don't occur naturally as normal distributions. Don't try to force it. Sometimes outliers are legitimate as well and they are part of the process.

To run a hypothesis test, you may need to transform the data or use a non-parametric test.

Find a career in Six Sigma