Green Belts focus on principles of variation reduction, Lean Manufacturing and should have a basic understanding of statistics. Their goals are both shifting the performance to a desired target and reducing the variation of a process.

They typically support Black Belts and are not always employed as full-time Green Belts. They often have a full-time role in the company and participate in Six Sigma projects as needed. However, Green Belts can lead their own teams and have a Black Belt serve as a mentor.

Click here (and go to the Quality Management section) to review variety of options from on-line, live, and classroom courses. These courses cover the DMAIC methodology,

You'll be prepared to converse and pace with progress and direction of certified Black Belt and Master Black Belts, and lead your first Six Sigma projects. 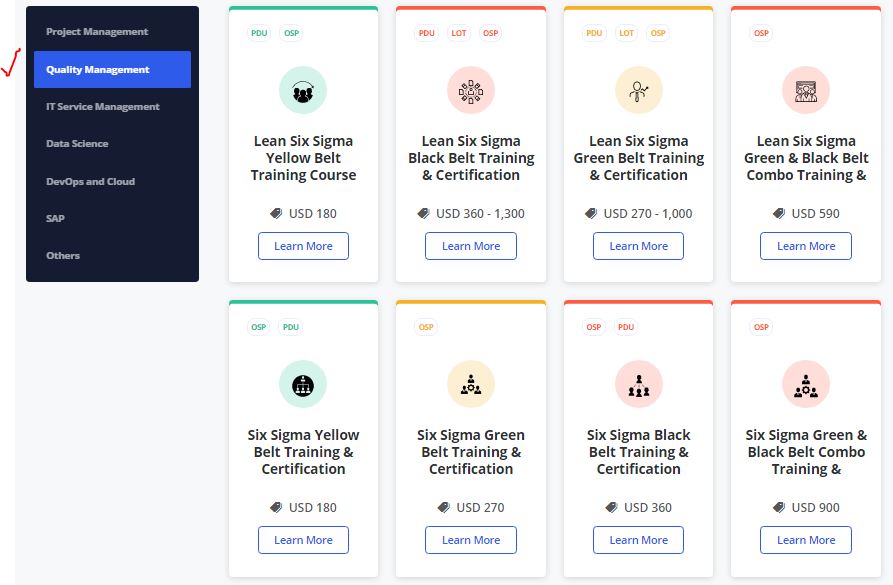 Download this Green Belt program in .pdf which includes >1,000 slides of material with examples. Working through this material will not only prepare you for a Green Belt project and certification, but set the foundation for a future as a Black Belt and beyond.

Green Belt Certification usually requires knowledge or execution of the tools shown below. At this stage, similar to Yellow Belts, they generally are not taught to create and manage a DOE. They are introduced to the basic non-normal distributions and hypothesis testing.

Green Belt certifications programs are less rigorous than Black Belt program but more than Yellow Belt and usually consist of:

There are also over 100 example certification problems available for subscribers of this site. Many of the problems have further explanations along with additional developmental material that can be found within this site.

GB's should possess an understanding of basic statistics and hypothesis testing with normal and non-normal distributions.