Regression and correlation are similar in that they both involve testing a relationship rather than testing of means or variances.

Both are used to find out the variables and to the degree the impact the response so that the team can control the key inputs. Controlling these key inputs is necessary to shift the mean and reduce variation of an overall Project "Y".

Recall that the Correlation coefficient (COC) indicates the amount of linear association that exists between two quantitative variables with a value between -1.0 to 1.0. An example value of -0.2636 indicates a weak negative correlation.

Regression provides an equation describing the nature of relationship such as

where m is the slope of this equation. This is most commonly used formula but not always the best fit. In this case, m, represents the slope (rise/run or change in Y per unit increase in X). And, b, represents the y-intercept or where the line crosses at x=0.

Noise Variable - input variables that are not controlled

There are various types of Regression:

Simple Linear Regression
Single regressor (x) variable such as x1 and model linear with respect to coefficients. This is the most common form of regression analysis.

It is possible to have a p-value below 0.05 however the R2 value is also relatively low which indicates there are other inputs and sources of variation (x’s) that should be included in the model.

Typically, larger R2 values represent a regression model that better fits the data (or your observations). However, there are limitations to R2 to be mindful of:

A biased model can have a low or high R2 value. If the R2 value is low, you may still have a good regression model.

R2 is unable to determine if predictions are biased which is a reason for examining the residuals which is explained later.

Remember that its valid for the range of data analyzed and any data outside (above or below) could change the true regression model and R2 value.

All of these formulas below are different ways to calculate R2 if you have the SS (Sum of Squares) values.

A Six Sigma Black Belt is interested in the relationship of the (input) Batch Size and its impact on the output of Machine Efficiency. The

The following data was gathered with as much caution to keep other variables constant. The same part number was ran on the same machine with the same operator under similar operating conditions.

Notice the minimum input batch size trialed was 25 and the maximum is 115. Therefore the inference range for any regression formula would be from 25 to 115.

The data was modeled with a Linear, Cubic, and Quadratic fitted line. See the charts below.

The initial scatter diagram (without any fitted line) isn't obvious that the relationship may not be best explained with linear fitted line plot so the Black Belt decides to model the data in various ways.

Notice the best fit is with the Quadratic fitted line plot that has an R2 value of nearly 97.9%.

Recall, the R2 value will be in a range from 0% - 100%. This represents the % of explained variation. This is the % variation of the y-values that are explained by the linear relationship with x. 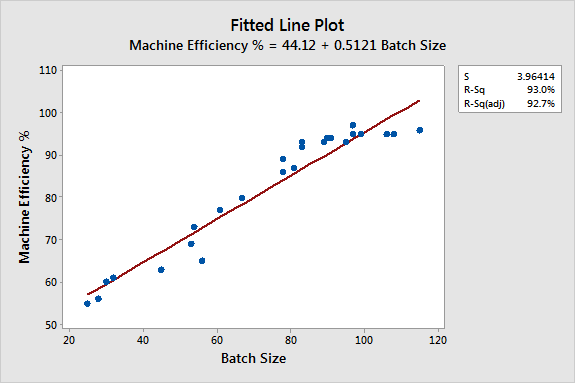 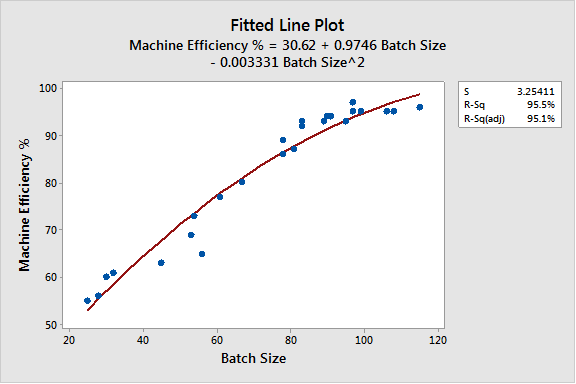 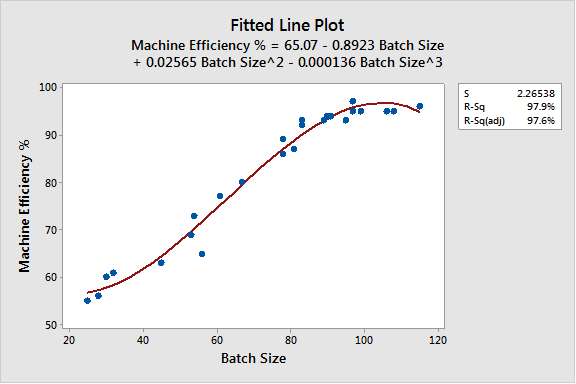 There are a few important points and takeaways from the results.

Producing in larger batches contradicts Lean principles and the objective to get to "one-piece flow" however it may be the most Economic Order Quantity (EOQ) for the business.

Every decision has pros/cons and can improve some metrics and hurt others. It's important for the team to weigh the pros/cons and get consensus.

Produce in larger batches if approved and necessary. Determine the EOQ and get consensus. Then focus on SMED and reducing the reasons to increase batch sizes in the first place. Continue to push for smaller batches but only AFTER improvements have been made and proven to justify a lower EOQ.

When those efforts are complete and the team has agreed that the reasons for increasing batches are all addressed with improvements in place, then batch sizes can be justified with buy in from management.

NOTE on the EOQ:

Remember, the EOQ for one operation may not be the best for the overall value stream. You must consider all the operations, movements, freight, etc. All too often, we see examples of an EOQ for one operation being set and it is not the optimal for several of the downstream operations. So one is fixed and the others get worse. Be careful to avoid this type of decision.

Click here to get an EOQ Calculator (and many others) 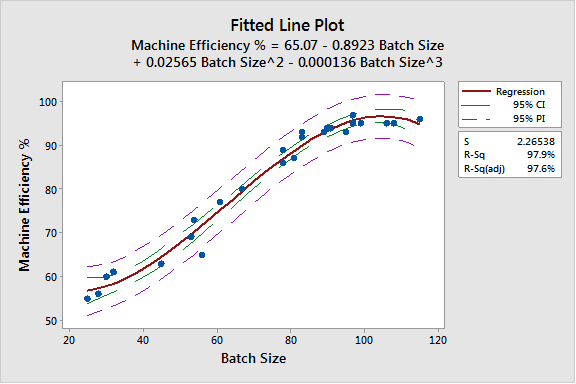 Using the 'Method of Least Squares' which determines a line minimizes the sum of squares of residuals.

Using the p-value refers to the hypothesis test of the slope of the best fit line. The p-value is the probability that the slope is significant.

If the p-value is < alpha risk (usually 0.05) then the regression is statistical significant and X is linearly related to Y.

The best equation to use to predict the efficiency is of batch sizes between 25 and 115 is:

The p-value is 0.000 which is < alpha risk of 0.05 so the equation can be used to model estimations within the inference range.

This means that you can apply this cubic formula to any batch size (x) to predict the machine efficiency.

If the batch size is 0, then Y would equal 65.07% machine efficiency. This is obviously not possible or realistic.

If the Batch Size was 1, this still represents an unrealistic output. So, it is important to use the Regression equation only within the Inference Range of 25 to 115 in this case.

The Finance Dept. has determined the EOQ to be a batch size of 65 since the cost of extra inventory is too great and there isn't ample storage space.

What is the Machine Efficiency at a Batch Size of 65?

You can expect the Machine Efficiency to be about 78%.

If you decide to input batch sizes <25 and >115 you are taking a chance of the prediction formula not being correct. Be careful...sometimes it works and sometimes it does not.

Before performing a complete regression study there are assumptions about residuals must be satisfied.  Residuals represent the error in the fit of regression line and is difference between the observed value of response variable and best fit value

The residuals must be:

Statistical software programs often have the capability of handling these reviews to determine whether the regression results can be used.

In the above, "Fitted Linear chart, a residual is the difference in the blue dot from the red fitted line.

The charts below are typical results using a software program to analyze the residuals which are the error in the fit of the regression line.

This is the difference between the observed value of the response variable and fitted value.

Examining a set of data, the visual results of the residuals are shown below.

The behavior appears to be independent, normal, and exhibit random behavior which is acceptable to proceed with developing a regression equation.

The top two charts show the residuals do not exhibit any obvious trends or patters. They follow a random distribution with equal variance

The bottom two charts of the histogram and "fat pencil" normality test indicate roughly that the residuals resemble a normal distribution.

If all the assumptions PASS, then the regression model is valid. 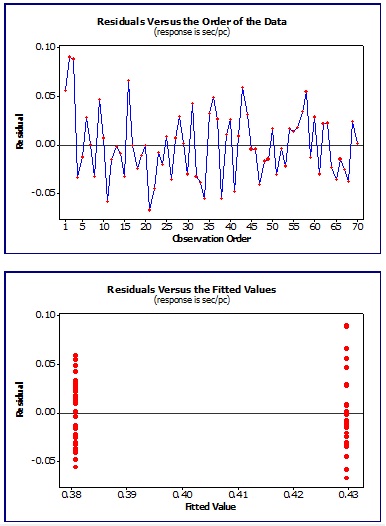 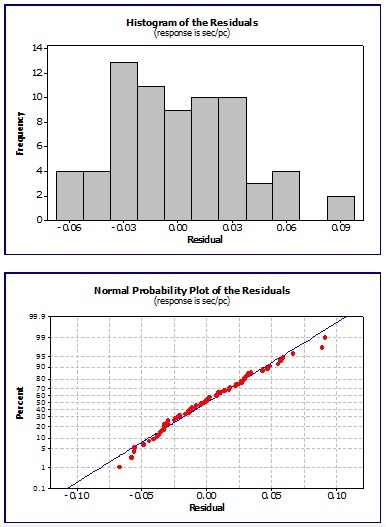 However, there may be instances where the residuals indicate an underlying behavior that needs further evaluation.

If there is a:

Pattern or Trend: Likely another underlying input variable that needs to be separated or studied further for its impact.

Outlier: Examine each case of special cause and correct or explain.

Non-normal distribution: There may be bi-modal or other skewness with data that requires further understanding.

In any event, you and the team will learn more by having this discussion. It is important not to ignore the residual evaluation. It is better to understand the lurking variables and special causes now in order to make appropriate improvements and prevent surprises in the CONTROL phase.