There are three primary types of Chi-square tests:

The Chi square distribution is a measure of difference between actual (observed) counts and expected counts. There are several types of chi square tests, this module reviews a couple of the most common tests.

Unlike the normal distribution, the chi-square distribution is not symmetric. Separate tables exist for the upper and lower tails of the distribution.

The figure below shows an example of a non-symmetric chi square distribution with the p-value representing the area of the rejection region under the curve that is greater than the test statistic. This example would be a one-tail test.

Assumptions for using these chi-square tests

Chi-square formula for test of independence 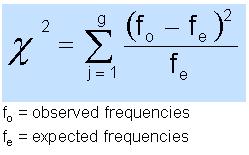 The GOF test compares the frequency of occurrence from an observed sample to the expected frequency from the hypothesized distribution.

As in all hypothesis tests, craft a statement (without numbers) using simple terms for the team's understanding and then create the numerical or statistical version of the problem statement.

Two methods can be applied to test the hypotheses. The decision to reject the null (and infer the alternative hypothesis) if:

Using Excel to determine the p-value is done by:

Excel asks for the "Actual" range which is the "Observed" range.

See the table below of the Observed values, Expected Values, and each chi-square value calculated using the formula above. The sums of all of them is the total chi-square statistic. 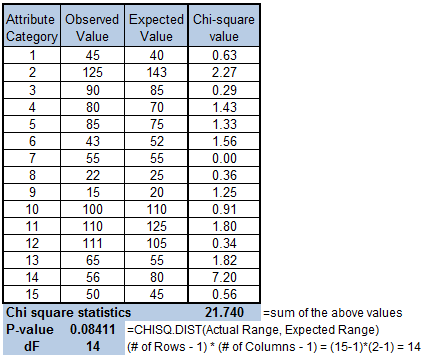 Tests the hypothesis of independence between two attribute variables. The test does not require an assumption of normality.

As in all hypothesis tests, craft a statement (without numbers) using simple terms for the team's understanding and then create the numerical or statistical version of the problem statement.

Creating a table helps visualize the values and ensure each condition is calculated correctly and then the sum of those is equal to actual chi-square calculated value.

This also helps to understand how difference observed values can affect the results of the test. In the example above, a small change in one or a couple of the data points (a higher separation between the observed and expected value) can create a p-value less than 0.05.

The chi-square calculated value is compared to the chi-square critical value depending on the Confidence Level desired (usually 95% which is alpha-risk of 5% or 0.05)

Notice that the example begins with the table to help visually explain the problem and makes it easier to follow the problem solving process.

As mentioned at the top of this page, the chi square test can be used to test if the variance of a population (σ2) is equal to a specified or target variance (σt2).

If the data can not be assumed normal, Levene's Test and the Brown-Forsythe Test are two nonparametric alternatives.

The null hypothesis (HO) is rejected if:

25 measurements were gathered from a widget and have a variance of 0.03 mm. Test the null hypothesis that the true variance is 0.02 mm. Assume a 95% Confidence Level.

Now look at the 0.975 column AND 0.025 column to find the respective starting points for the rejection regions on each side of the chi square distribution.

There the null hypothesis is rejected and the alternative is inferred which means the variance is different than the true variance. 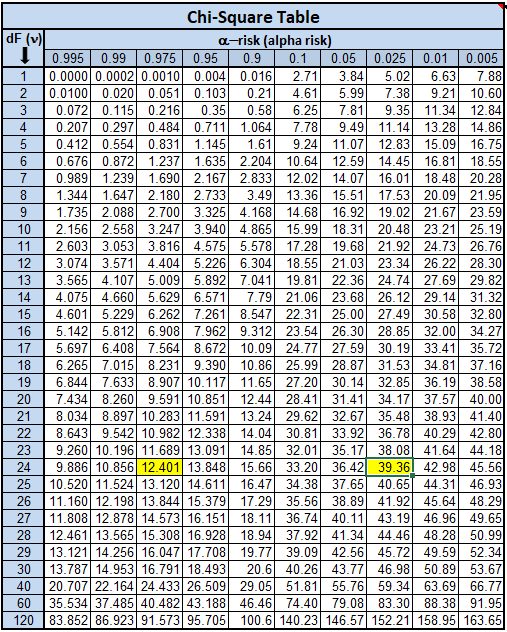 These questions have been known to appear on statistics and Six Sigma quizzes. What test best fits the process/statement described below:

1) Does the data validate the normal probability distribution assumption?

2) Data were gathered in an experiment comparing the effects of three insecticides in controlling a certain species of parasitic beetle. Each observation represents the number of such insects found dead in a certain fixed area treated with an insecticide.

1) Comparing data to see how well it fits the normal distribution: Chi-square goodness-of-fit

Return to the Six-Sigma-Material home page