The z-score calculation can be done a couple of ways. This score used in the MEASURE as a baseline measurement and in CONTROL phase (for a final score) of a DMAIC Six Sigma project.

The formula below converts a point of interest (x) in terms of standard deviations from the population mean. This is the value to be "standardized".

It allows the comparison of observations from different normal distributions. If the value of x is less than the mean, then the z-score is negative and vice versa. Other names for the z-score are z-values, normal scores, and standardized score.

Another z-score is calculated in the CONTROL phase. Sometimes it is done at the end of the IMPROVE phase but either way it is the final score indicating the change (better or worse) relative to the baseline measurement.

The z-score is most often used in the z-test in the Student's t-test for a population whose parameters are actually known (not estimates). But since it is rare to know the entire population, the t-test is more commonly used.

Another way to calculate z-score

Depending in the information provided, you may not know the inputs for the formula above and instead you may have to use DPU, DPO, DMPO, and Yield to get the sigma score.

If you had 100 orders delivered and 11 of them were late and another 5 were incorrect, calculate the z-score.

Let's break this down step by step.

The 1.5σ is the assumed shift for short term performance which is the theoretical best case scenario or entitlement.

The important part of the calculation is to get the DPO value. Once you have that then the Yield is easy to calculate which is 1 - DPO.

In this case, your team is starting with baseline measurement of 80,000 DPMO (or 1.405 sigma) and the goal is to get to 3.4 DPMO (which is 4.5 sigma long term but Six Sigma performance in the short term).

See how it works:

A benchmark sigma (z-bench) score offers an fair comparison for products or processes. A benchmark z-score is often unknown at the onset of the Project Contract and is a critical component for a GB/BB to determine as early as possible in the DMAIC project path.

Once the baseline is determined then the contract is updated and all key stakeholders and revisit the potential savings and impact of the project and possibly redefine the scope.

The GB/BB's job is to collect the necessary data once the MSA passes to calculate and convert this data to a sigma score.

A couple simple useful formulas as estimates (if the DPO is small) are:

If your data represents a shorter time frame or a short term sample then it is important to consider applying the 1.5 sigma shift to indicate what the longer term performance would actually be as a baseline. Further below is an explanation on converting short term to long term z-scores.

Recall e is the exponential constant and is approximately 2.71828

Click here to be redirected to a presentation that shows how to calculate z-scores on TI graphing calculators.

Motorola is credited with concluding that processes drift over long periods of time. The term is known as Long-Term Dynamic Mean Variation or in simpler terms, the "fudge factor". This variation between the short term samples was determined to be approximately 1.5 sigma.

Six Sigma projects usually report process capability in terms of short-term performance. The true long term performance is estimated to have some special cause and unexpected performance (since Motorola confirmed this after years or study) and therefore estimated to be 1.5 sigma lower than the short term z-score.

If the z-score was calculated from a sample then the long-term performance can be estimated by subtracting 1.5 sigma from your calculated value for short term sigma.

Recall that if you arrive at DPMO that is considered a long term process indicator but it may not be if you have populations normally in the billions or trillions. It is important to use the shift appropriately. Using enough process data a GB/BB can even estimate the shift for their own process.

If the value you came up with was from a population it is a long term representation of the process performance. Therefore, if interested in the projected short-term performance then you would add 1.5 from your calculated z-score.

If the point of interest (x) is located on the mean then the z-score is zero. This seems logical since the point lies directly on the mean with zero standard deviation from the mean.

If the point of interest (original measurement, x) is below the mean then the z-score will be negative. The z-score is positive when the x is a value higher or to the right of the mean.

The empirical rule for a normal distribution says that about 99.73% of all x values are within 3 standard deviations of the mean which, in terms of a z-distribution, is represented by z = -3 to z = +3.

When a population is normally distributed, the percentile rank may be determined from the z-score and statistical tables. It is important to understand the table being used as websites or textbooks display the values in different ways.

This is most often the most challenging part to a newer GB/BB and common mistake made on exams and projects. Get comfortable with converting z-scores to percentile ranks, PPM's, DPMO, and using tables.

Given a normally distributed set of data we know the following:

Since the point of interest is greater than the mean you can expect a positive z-value. Substituting the values into the formula at the top of the page:

The value of 61 is 2 standard deviations (2σ) away from the mean.

Using Excel to get the Cumulative Distribution Function (CDF) under the point of interest 'x". 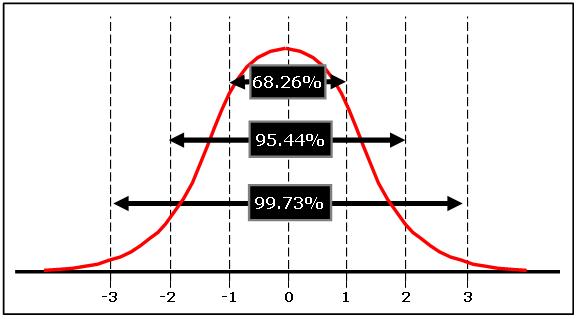 Given a normally distributed set of data we know the following:

What is the total % of parts that can be expected to be defective?

This is a two-part problem.

Referring to a z-table that score equates to 6.8%

Referring to a z-table that score equates to 0.66%

The total expected defective parts related to the length are:

This is a two step problem since you are looking for an area within the standard random normal distribution curve. Using the table below

Think of this as representing 97.5% of the total area under the entire bell curve. See the table below to see how the 0.9750 was found. 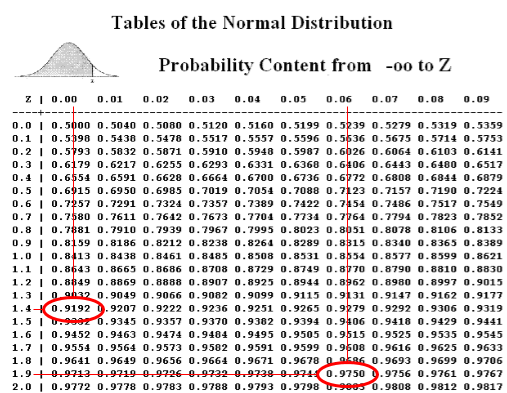 5.58% of the total area is under the entire standard normal distribution curve is in this region. This is the probability that z is within the region. 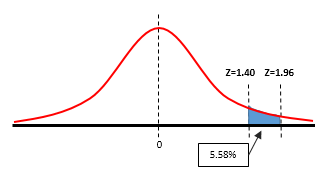 Return to the Six-Sigma-Material home page