Proper data classification is the first step to ensure the correct statistical tools are used to analyze baseline and final performance.

Six Sigma projects can start out with the wrong baseline sigma scores or control charts as a result of improper data classification. The goal is not only selecting the correct data type but to collect data that provides the most information at the least expense. There are four levels of data measurements: Nominal, Ordinal, Interval, and Ratio.

The continuous random variables can be any of the infinite number of values ​​over a given interval. These variables generally represent things that are measured, NOT counted.

Data types that have a finite number of measurements and are based on counts. Data that can be sorted into distinct, countable, and in completely separate categories. The count value can not be divided further on an infinite scale with meaning.

Example: How many people can comfortably fit into an airplane? It does not make sense to say 129.7632213 people. It is either 129 or 130, in this case you would round down to 129. Attribute and discrete do not mean exactly the same when describing data, discrete has more than two outcomes.

Used to represent the presence or lack of a certain characteristic. A binomial measurement has two characteristics. This is the lowest level of data type due to low level of information provided.

The measures of central tendency are the mean, variance, and standard deviation.

The mean is the expected value over a long run of occurrences. The standard deviation is simple the square root of the variance. The mean is the most commonly used measure of central tendency. It is the measurement used when analyzing a normal distribution of data. Data that uses concentration charts and answers the question “where”. Such as the concentrations of poverty in dfferent regions of the world. Locations such as City, Suburb, and Rural would be types of Nominal Data.

NOTE: Convert to continuous data when possible as shown in the table below are a few examples to obtain a higher level of information and detail:

Instead of a shipment being late or on time, it is better to know how late or how early the shipment arrived from the due date. It may be acceptable if shipments are within +/- 2 days, but the best score is given when shipments arrive at due date or +1 day.

Recording YES / NO for on-time delivery will not provide the level of detail to make the best decisions.

Instead of recording just the dollars or pieces scrapped, it is more valuable to know the scrap per unit or scrap per sales.

If Plant A had molding scrap cost of $ 63,000 / month and Plant B scraps $ 48,000 / month, which performed better? With a denominator such as sales dollars a better conclusion can be made.

Instead of recording whether students PASS or FAILED the SAT, it would be better to have each student's score on the SAT.

The lowest level of data classification. A numerical label that represents a qualitative description. These numbers are labels or assignments of numbers that represent a category or classification. This is also referred to a categorical data usually of more than two categories and is a form of discrete data and should apply nonparametric test to analyze. The number assignment does not reflect that one category is better or worse than another.

The mode is the measure of central tendency.

The average of the data or variance of the data is meaningless and values ​​and quantitative descriptions are not appropriate. There is also no priority or rank based on these numbers.

The next level higher of data classification than nominal data. Numerical data where number is assigned to represent a qualitative description similar to nominal data. These are measures by only the rank order.

However, these numbers can be arranged to represent worst to best or vice-versa. Ordinal data is a form of discrete data and should apply non-parametric test to analysis.

The median or mode are measures of central tendency.

Ordinal data is sorted into categories and the categories can be put in a logical order but the intervals between categories is not defined.

Ordinal data is also round when ranking sports teams, ranking the best cities to live, most popular beaches, and survey questionnaires.

The next higher level of data classification. Numerical data where the data can be arranged in an order and the differences between the values ​​are meaningful but not necessarily a zero point. These are measures using equal intervals.

The lowest appropriate level for the mean is interval data. The mean, median or mode are measures of central tendency.

Parametric AND nonparametric statistical techniques can be used to analyze interval data.

Examples are temperature readings in C or F, percentage change in performance of machine, time of day, calendar days, and dollar change in price of oil / gallon.

Similar to interval data EXCEPT has a defined absolute zero point and is the highest level of data measurement. Ratio data can be both continuous and discrete.

Ratio level data has the highest level of usage and can be analyzed in more ways than the other three types of data.

The mean, median or mode are measures of central tendency.

Please note that some measure, such as height, can be in more than one measurment scale. Height could be measured with Short, Medium, Tall but there is more information if measured to an exact centimeter (Ratio) 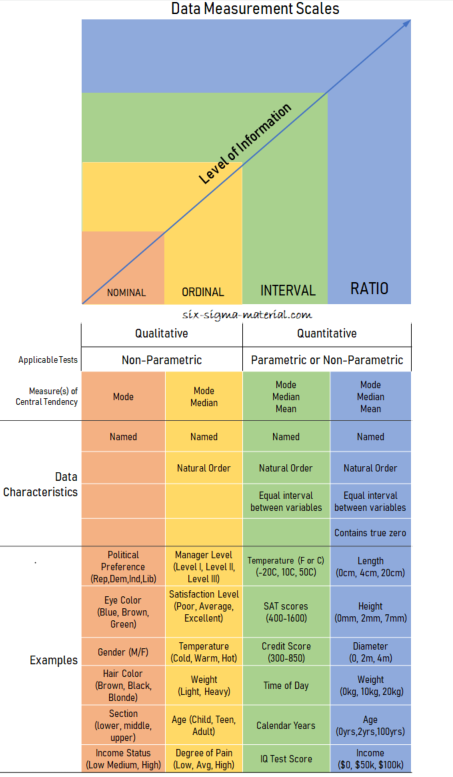