The following assumptions and rules apply to use the Hypergeometric Distribution:

A random variable (x) follows this distribution if its probability mass function is given by the formula shown below: 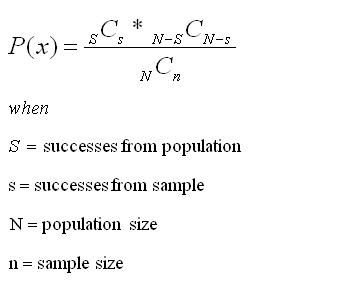 Substitute the values above into the probability formula above: 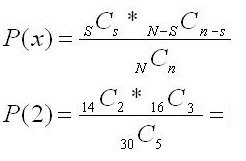 The denominator represents the total amount of combinations of selecting 5 parts from 30 parts, which is 142,506 for this example.

Keep in mind, this says "defective" parts. Each part may have one or more "defects" that cause the part to be appraised as a "defective" part. There is a difference between and defective part and a defect on a part.

Most statistical software programs can solve for probabilities when given the correct inputs. Entering the data correctly can be tricky so be sure to review the examples or 'help' sections within the software.

Return to other Discrete Distributions