The Exponential Distribution is continuous distribution commonly used to model waiting times before a given event occurs. It's also used for products with constant failure or arrival rates. It represents the time between trials in a Poisson process.

If this waiting time is unknown, it can be considered a random variable, x, with an exponential distribution.

Generally, if the probability of an event occurs during a certain time interval is proportional to the length of that time interval, then the time elapsed follows an exponential distribution.

When the downtime can be predicted, not only can it control costs but managing labor becomes easier and machine OEE improves. All three components of OEE (Availability, Performance, Quality) could benefit from effective probability information.

Understanding the probability until a failure or a particular event can be very valuable information. While we all try to read the crystal ball the best we can, any reliable tool to predict the future is powerful for obvious reasons.

This is a continuous probability distribution function with formula shown below:

MBT = the mean time between occurrences which = 1 / λ

What is the standard deviation of a process with a mean (MBT) of 15.0 and follows the exponential distribution?

The time between failures in a hemming machine modeled with the exponential distribution has a MBT rate of 112.4 hours. The Six Sigma team has a goal to increase the MBT to greater than or equal to 150 hours.

To help understand the current state, what is the probability that the time until the next failure is less than 150 hours?

The probability of the hemming machine failing in < 150 hours is 73.7% in its current state. This is a baseline measurement for the team.

In the IMPROVE phase, the team goes on to make several modifications to the machine and collects new data. They show a presentation to others in the company that claims the probability of the time until the next failure has been reduced to <5%.

What must the new minimum MBT rate be at a minimum to achieve this probability of =<5%?

We need to work backwards with the data provided and solve for MBT. Start with:

This would mean that the team claims a new MBT rate of AT LEAST 2,294 hours!

We're not sure how many data points they could have collected so this would be some extreme claim from the team.

The key is to not only improve the MEAN but more importantly REDUCE THE VARIATION.

If the failure rate is not consistent (meaning that the failure rate has a high variance and standard deviation) then that represents unreliability and a confidence interval will indicate a better depiction of what will likely occur in the future (using an alpha-risk of 0.05).

The team should present data in terms of central tendency (MBT in this case) but also measures of dispersion and use a confidence interval on the actual "after" data collected.

1) the event can occur more than 1 time

2) the time between two successive occurrences is exponentially distributed

3) the events are independent of previous occurrences

Both the Poisson Distribution and Exponential Distribution are used to model rates but the latter is used when the data type is continuous.

If the random variable, x, has an Exponential distribution then the reciprocal (1/x) has a Poisson Distribution.

The Poisson Distribution is applied to model the number of events (counts) or occurrence per interval or given period (could be arrivals, defects, failures, eruptions, calls, etc.). This models discrete random variable.

The Exponential Distribution is applied to model the mean time (such as waiting times) between occurrences, time is a continuous variable.

Shown below are graphical distributions at various values for Lambda and time (t). The formula in Excel is shown at the top of the figure. They each take on a similar shape; however, as Lambda decreases the distribution does flatten. 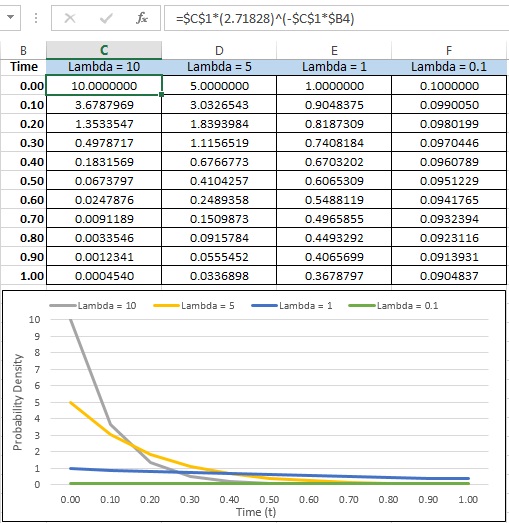 Recommended video on Poisson and Exponential