Short term samples provide a smaller segment of the population and therefore carry more risks in terms of being able to infer the population parameters and detecting differences.

The more data you can collect, the more the samples begin to represent the population and thus goes from "short" term to "long term" to eventually the entire population.

If you can realistically and practically get data on an entire population, then obviously all this notion is irrelevant and your hypothesis testing has the most power.

Below are a couple figures to help visualize the relationship of samples that make up the population. Samples are most often used to infer statistics about the population. The longer the term of the sample, the more likely it is to represent the entire population.

The size of the sample must be consciously decided on by the Six Sigma Project Manager based on the allowable alpha and beta-risks (statistical significance) and the magnitude of shift that you need to observe for a change of practical significance.

As the sample size increases, the estimate of the true population parameter gets stronger and can more reliably detect smaller differences.

This seems logical, the closer you get to analyzing all the population, the more accurate your inferences will be about that population. 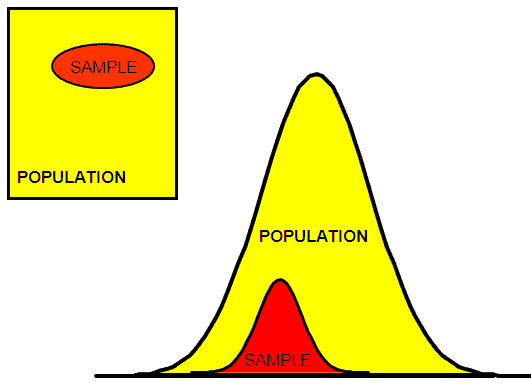 As a general rule, six sigma performance is a long-term process that creates a level of 3.4 defects per million opportunities (DPMO).

If the area under the normal curve represents one million opportunities, then approximately 3.4 of them would be outside of the customer specification limit(s) when shifted 1.5 sigma to account for all the short-term shifts.

A six sigma process refers to the process short-term performance or how it is performing currently. When referring to DPMO of the process, we are referring to long-term or projected performance behavior. DPMO is a more exact and informative measurement than PPM.

A typical process has been proven to have a shift in its average performance of up to +/- 1.5 sigma over the long term. A long-term Six Sigma process that is rated at 4.5 sigma is considered to have a short-term sigma score of 6 sigma. The combination of all the short-term samples that make up the long-term performance will create no more than 3.4 defects per million opportunities.

A process, product, or service would need to create conformance

and sustaining a process mean shift of up to 1.5 standard deviations (sigma).

DPMO is NOT the same as PPM since it is possible that each unit (part) being appraised may be found to have multiple defects of the same type or may have multiple types of defects.

A part is defective if it has one or more defects. Defectives can never exceed defects. IF each part only has one characteristic that can be a defect, then DPMO and PPM will be the same.

DPMO will always exceed or equal PPM for a given yield or sigma level of performance.


Return to Population and Samples