The range, R, of the data is the difference of the highest and smallest values.

The deviation is the difference of each value from the mean. This is used in the calculation of the standard deviation and variance. "x" is the point of interest.

The sum of deviations from the mean is always zero.

The standard deviation is shown by the following formulas. It also equals the square root of the variance. "x" is the point of interest.

As the sample size approaches infinity, the denominators in both formulas become equal. The "n-1" is to remove bias from very small sample sizes such as less than 30 samples.

The variance is the standard deviation squared. The variance can not be calculated unless it is known that the data being analyzed is from a Population or Sample. This will change the denominator value. As the sample size approaches infinity, this difference in the values ("N" or "n-1") becomes negligible.

A term called "degrees of freedom (dF)" is commonly found in statistics. This refers to the number of independent values. For example, in the denominator of the standard deviation and variance formula is a value of "n-1".

This is also known as the number of degrees of freedom. If a particular sample size has 15 values then n = 15.

If 14 of the 15 values are known and the value of X-bar (sample mean) is known, then it is possible to calculate the final unknown value in the sample set.

The table shown below is a numerical summary of the measures of central tendency and dispersion for the data set shown at the top of the page. 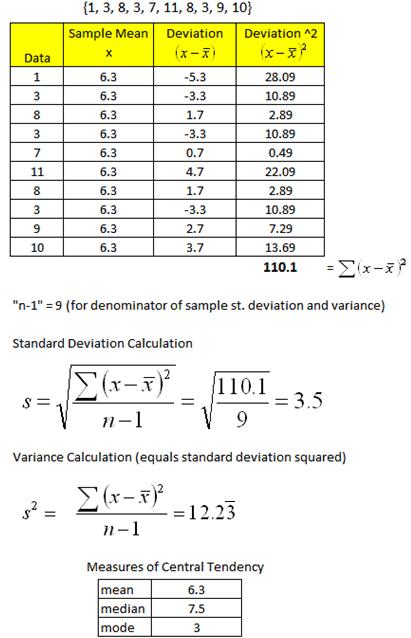 The coefficient of variation is the ratio of the standard deviation to the mean. This value is expressed as a percentage and helps to determine comparing variability when mean is also known.

This is not the same as Covariance.

Comparing variability is stocks, machines, operators, and shifts, commonly use the coefficient of variation.

If we only know the standard deviation of the performance on 5 machines it may not be satisfactory to make a good decision if stability is most important. Then you are interested in the mean and how much variability from the mean the machines exhibit.

If it is known that all machines have a standard deviation of 2 pieces/hour, which one is worse assuming you want stability and predictability?

The correct answer is the machine with the highest mean pieces/hour has less risk and is more predictable to generate consistent performance.

This measurement is commonly used to assess risk among stocks for risk-return. The mean is the "expected return".

The formula is shown below:

Although the standard deviation is less for Stock 1, the stock is riskier and predicted to have more volatility in performance.

STOCK 3 has lowest risk of the three stocks.

The table below summarizes notation for describing samples and populations. 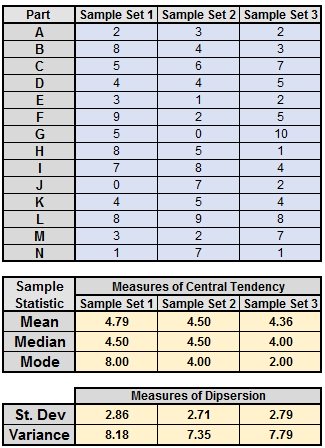 Excel uses "n-1" in the denominator to calculate the sample statistics for the measures of dispersion and central tendency (the rows in Excel for the data were in rows 3-16).