Correlation and Regression studies are normally done together as part of the ANALYZE phase of a DMAIC project.

Correlation studies and dependencies tend to be stronger with more data and the maximum range being applied (be aware this can also hide areas of correlation or unique relationships with subsets of the data).

However, visualization of the data set can also show that there may exist varying relationships within the range of samples. Within a smaller specific range there could be a relationship, and then another range could show a different relationship.

The picture to the left shows that there is very little, if any, correlation of the variables.

They are independent variables at least within the range of inputs studied and the "r" value is approximately zero.

A correlation value may be close to zero but closer review will indicate enlightening information. As mentioned earlier, be aware that sometimes too much data can hide relationships.

The point is to run the correlation visually and mathematically.

Regression and correlation involve testing a relationship rather than testing of means or variances. They are used to find out the variables and to the degree the impact the response so that the team can control the key inputs. Controlling these key inputs is done to shift the mean and reduce variation of an overall Project "Y".

There are several correlation coefficients in use but the most frequently used is the Pearson Product Moment Correlation, also referred to as the Coefficient of Correlation (COC) that measures only a linear relationship between two variables and is denoted by an "r" value. The formula is shown below.

The degree of linear association between two variables is quantified by the COC.

As expected, an outlier is likely to take away from the linear association of the other non-outlying variables whether the association is negative or positive.

The data classification for each of the variables must be ratio or interval types and the relationship must be monotonic.

The "r" value represents a unitless translation of covariance, meaning the closer the value is to +1, the closer the linear relationship is between the x and y random variables.

As the value of "r" approaches zero from either side, the correlation is weaker. That is the input, x, has a lower correlation on the output, y.

This is normally shown by a x-y plot referred to as a Scatter Graph. This graph shows all the data points where the input, x, is varied systematically and the output, or the effect, of y is measured.

A "r" value of +1.0 indicates a perfect and strong POSITIVE correlation.

A "r" value of -1.0 indicates a perfect and strong NEGATIVE correlation or anticorrelation.

A data set that does not have a slope (slope = 0) will have a correlation coefficient that is undefined because the variance of Y is zero. In other words, the output is not affected by any of the input values. 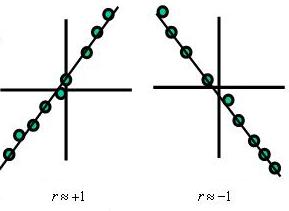 Shown below in the video is an example starting with a set of data and progressive steps to manually calculate the LINEAR correlation coefficient, "r".

This is a study between the number of caterpillars in a cabbage patch and the quantity of cabbages destroyed.

The picture below indicates a strong relationship that would not be evident by simply analyzing the "r" value.  The "r" value is going to be close to zero which means the variables are independent. Recall, the "r" value is measure of linear association only.

There is another measurement that explains association. Visit Spearman's Rho Correlation Coefficient for an explanation of the monotonic association strength between two variables.

However, when it comes to data similar to the picture below there is strong indication that an association exist but it is non-linear.

This module doesn't investigate non-linear mathematical relationships but it is important to understand they exist as the picture below shows (which is non-linear and non-monotonic). 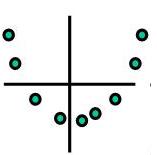 More about COC and COD

In other words, it is the percentage of variation in Y explained by the linear relationship with X.

The COC is a value from -1 to +1 that describes the linear correlation of the dependent and independent variable. A value near zero indicates no linear relationship. 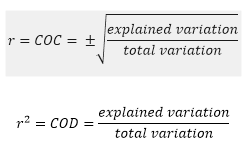 Correlation interpretations from data or graphs can be wrong if it is purely coincidental.

Regardless of how strong (positive or negative) it may appear, Correlation never implies causation. There could be other variables behind the one charted that could be a factor.

For example, a chart or correlation value may indicate a strong relationship (linear or non-linear) but in reality there may be no relationship or dependency at all.

Just like most statistical results they must be reviewed subjectively with consideration of common sense. This is done with the Six Sigma team. The GB/BB is responsible for sharing the results in any way to help the team make the right decisions.

It is possible to have the same "r" value and have several different graphical representations, another reason to review the scatter plot and "r" value together.

1) 85% of the variation is explained by the regression model

2) The correlation can be positive or negative

Both responses are true. 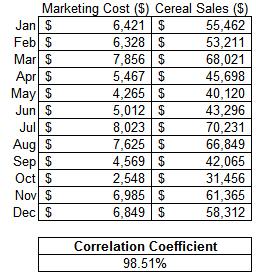 Visually depicting the data is recommended whether is it time-series charts, scatter plots, or box plots. This helps in seeing trends and overall behavioral relationships between data. A couple graphs of the data are shown below. The scatter plot shows quickly that there appears to be a strong linear correlation. 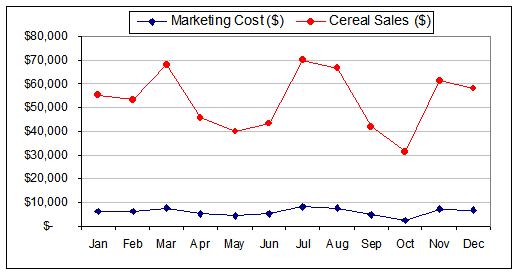 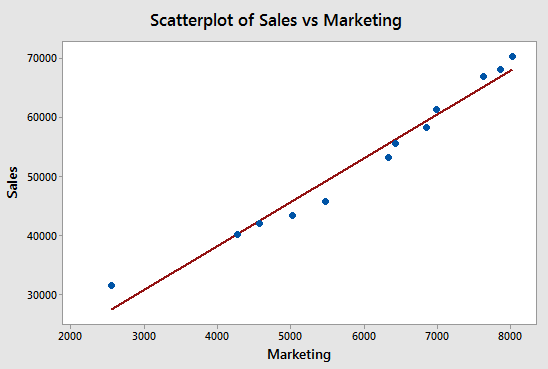 Is there a relationship between the amount of money dedicated to marketing to the sales of cereal and what is the strength of the relations?

Ho: Sales and Marketing dollars spent are not correlated

Choose a Level of Significance

Find Correlation from the pull-down menu and enter both continuous sets of data and use Pearson Correlation, then the results are shown. 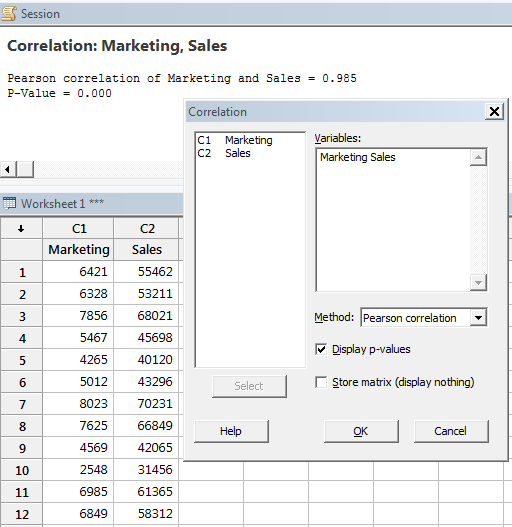 With those results, reject the null and infer that there is a statistically significant correlation (which is the alternative hypothesis).

Likely, at some point, that cereal sales would level off regardless of how high the amount of marketing dollars. That is why it is very important to keep your conclusion with the inference range.

Another method to perform the statistical evaluation is by comparing the r- calculated value of 0.9851 to the r-critical value.

If the value of r-calculated is >0.4973, then there is a statistical significant correlation and in this example that is clearly the case.

Regression takes it a step further and develops a formula to describe the nature of the relationship. Visit the Regression module for more information.

As indicated earlier, the scatter plot should be visually examined. Even if the correlation coefficient was very low (linear relationship) there may be a non-linear relationship such as cubic or quadratic that could be very strong.

Finding the Pearson Correlation Coefficient of two sets of data is done in Excel as shown below. The data does not have to be normally distributed but do have to be equal sample sizes.

The Pearson Correlation Coefficient between these two sets of data is -0.2636, a weak negative correlation. 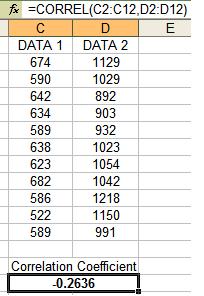 How does Correlation relate to Regression?

Recall that Correlation indicates the amount of linear association that exists between two variables in the form of a value between -1.0 to 1.0.

Such as the linear correlation from earlier example where the value of -0.2636 was found and indicates a negative correlation but it is not very strong.

Regression provides an equation describing the nature of relationship such as y=mx+b.

There are various types of Regression:

How does Correlation relate to Covariance?

While the Covariance indicates how well two variables move together, Correlation provides the strength of the variables and is a normalized version of Covariance. They both will always have the same sign: positive, negative, or 0.

Correlation is a dimensionless value that will always be between -1.0 and +1.0, with 0 indicating the two variables move randomly from each other and are uncorrelated. Values closer to 0 (either negative or positive indicate weaker and weaker correlation.

Values near zero for both parameters equates to no relationship or correlation and therefore those inputs or combination of inputs are not related to the output. This is valuable to the Six Sigma team so this input can be ruled out (unless it has a impact as in a combination with another input).

The following formula illustrates the relationship of the two terms. The formula below applies for sample and population calculations.

Return to the ANALYZE Phase