Six Sigma is a scientific methodology that strives to achieve perfect quality in the eyes (a.k.a. Voice) of the Customer. Six Sigma is trademark of Motorola, Inc.

It's a structured performance improvement process that has nothing to do with martial arts other than the names were taken to dictate the levels of expertise. Individuals that manage Six Sigma projects and/or participate on them are given martial arts terms such as: Yellow Belt, Green Belt, Black Belt, and Master Black Belt

These individuals learn the Six Sigma principles and methodology which are a combination of traditional tools with recent breakthroughs in conjunction with statistics organized in a disciplined structure.

Perfect takes on various standards depending on the industry, process, service, or customer. Six Sigma performance is generally considered the standard for perfection but this level of performance may not always meet the customer expectations.

Having a six sigma defect rate can represent perfection in some areas and not for others. If the process involves life dependent or critical products then this rate of defects is not going to be acceptable. In other cases the unnecessary precision may be too expensive to achieve at least six sigma performance.

Quality has a wide array of definitions, it can relate to reducing defects, reducing inventory, improving scorecards, morale, and creating new products and services.

Customer also has a diverse scope consisting of the end-users, downstream operators, the company, and lost or potential end-users.

The methodology uses statistics to help make decisions (along with subjective reasoning and some common sense) rather than just someone's intuition or gut feeling. The use of statistics also shows magnitude of change and increases the level of information to a company.

Many organizations are combining the principles of Lean Manufacturing, Theory of Constraints, and Six Sigma into one program and labeing it as Lean Six Sigma.

The three methodologies are summarized below.

All three of them have a collective goal to improve the process performance towards a target (improve the mean), improve customer satisfaction, and profitability.

You may fall short of satisfying the customer if using anything short of all three. Any of the three are beneficial but may not be enough alone to get the best results.

A successful project will have controllable inputs that provide consistent and accurate output. This type of result requires the collective use of all three methodologies. 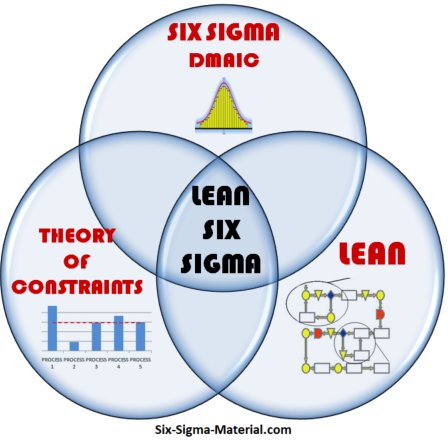 Working as a Six Sigma project leader can be a very rewarding and well-paying career. Often Green Belts and Yellow Belts are trained in the principles but retain their original job while using the basic principles in their daily work. The Master Black Belt is a subject matter expert. Search for Six Sigma related job openings here.

Six Sigma programs aim to be proactive by applying an array of statistical tools to understand the impact of all key input variables causing the variation of a process (in the case for DMAIC project) or create a defect free, minimal variation product or process at inception (in the case for a DFSS - Design for Six Sigma).

With the tools, a Green Belt or Black Belt, can guide the cross functional team to focus their efforts around controlling the critical inputs to deliver repetitive, customer satisfying, low-cost products, processes, and services.

The tools (and correct interpretation) will help direct the team's decisions to the most effective and efficient improvements. This avoids losing valuable time on the lesser significant inputs to not only improve the process but in an very efficient way.

Sigma is a measure of the process variability or spread. The higher the sigma level the fewer defects the process creates.

Six sigma performance is a long term (future) process that creates a level of 3.4 defects per million opportunities (DPMO). If the area under the normal curve represents one million opportunities then approximately 3.4 of them would be outside of the customer specification limit(s) when shifted 1.5 sigma to account for all the short term shifts.

A typical process has been proven to have a shift in its average performance of up to +/- 1.5 sigma over the long term. A long term Six Sigma process that is rated at 4.5 sigma is considered to have a short term sigma score of 6 sigma. The combination of all the short term samples that make up the long term performance will create no more than 3.4 defects per million opportunities.

A process, product, or service would need to create conformance

and sustaining a process mean shift of up to 1.5 standard deviations (sigma).

The methodology focuses on variation reduction within a process and designing new processes or products that will perform at a near perfect and consistent level over the long term.

Six Sigma is about making money

The real motivation for implementing a Six Sigma program is to make more money. Six Sigma methods are used to improve customer satisfaction, increase sales, reduce defects but all those are leading indicators to profitability which is the ultimate goal.

The methodology not only strives to maximize profits but ensures stability in those returns and predictability.

The formula below simply states that a process output (Y) is a function of its inputs. Too often companies measure the Y to heavily and focus on controlling just the Y rather than focus the inputs and this can create conflicting focus across the company on too many inputs or not the most vital inputs.

Y = an ouput, the effect, or the symptom (there is one output)

X = an input to the process, a cause, a variable (likely many inputs)

While the outputs are important, Six Sigma focuses on controlling the inputs to get an output the has minimal variation, is on target, and meets the customer specifications.

There may be a few to several thousand inputs. The Six Sigma team's job is to identify and prioritize them through subjective and statistical analysis for improvement opportunities. Then, a relentless drive to make the improvements and SUSTAIN the gains prior to closing the contract.

You must control the inputs to move the output to a desired, controlled output!

The Principle of Six Sigma

Not every process will end up at 3.4 DPMO (6 sigma) and it may not be necessary. On the other hand, 6 sigma may not be good enough.

Depending on industry and critical nature of process the team needs to determine what is the goal for their project. The team then goes through the DMAIC methodology (or DFSS) of controlling the KPIV (key process input variables) the team makes a fundamental shift to meet and exceed customer expectations and most important, SUSTAINS the gains. 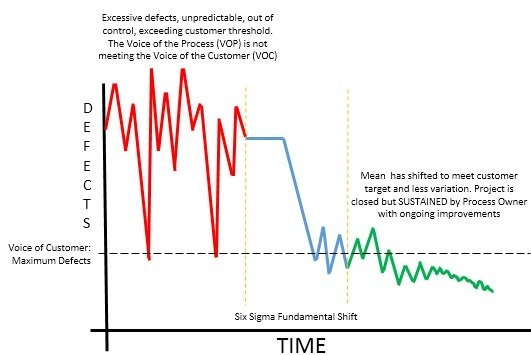 The ISO (the International Organization for Standardization) has published a few standards due to it's global popularity and attempt to standardize the process and reporting. However the standard does not cover the DFSS process, only DMAIC.

You can preview more and purchase the standard by clicking here.

ISO 13053-1:2011 recommends the preferred or best practice for each of the phases of the DMAIC methodology used during the execution of a Six Sigma project. It also recommends how Six Sigma projects should be managed and describes the roles, expertise and training of the personnel involved in such projects. It is applicable to organizations using manufacturing processes as well as service and transactional processes.

Describes the tools and techniques, illustrated by factsheets, to be used at each phase of the DMAIC approach.

The methodology set out in ISO 13053-1 is generic and remains independent of any individual industrial or economic sector. This makes the tools and techniques described in ISO 13053-2:2011 applicable to any sector of activity and any size business seeking to gain a competitive advantage.

Quantitative methods in process improvement - Six Sigma — Competencies for key personnel and their organizations in relation to Six Sigma and Lean implementation.

There is quite a bit of debate over the qualifications for each level of Six Sigma's "belts" and the boundaries that distinguish each of them. This standard defines competencies for attaining of specific levels of competency with regards to Six Sigma, Lean, and "Lean & Six Sigma" in individuals, e.g. Black Belt, Green Belt and Lean practitioners and their organizations. Yellow Belt is not included and excludes the DFSS process.