In other words, when using a nonparametric test more data is needed to detect the same size difference as a parametric equivalent.

Nonparametric tests also assume that the underlying distributions are symmetric but not necessarily normal. The assumption is these test statistics are "distribution-free. In other words, there aren't any assumptions made about the population parameters.

For example, if you are not sure if two data sets are normally distributed it may be safer to substitute the Mann-Whitney test to reduce the risk of drawing a wrong conclusion when testing two means.

Nonparametric tests are used when: 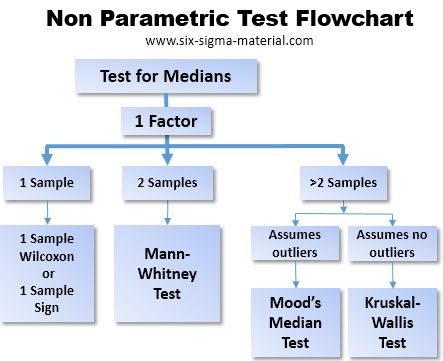 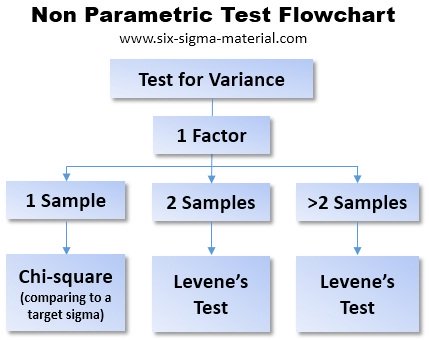 When to use Nonparametric Tests

These are the most commonly used nonparametric equivalents. There are many more nonparametric tests but these are most likely to arise on a Six Sigma project and a certification exam.

A sample and a target (or given value)

Nonparametric - One Sample Wilcoxon or One Sample Sign (testing medians)

Use the Runs Test to examine the randomness of the data and whether a sequence of samples are randomly distributed.

Use Spearman Rank Correlation to examine the correlation between two data sets.

Use Goodman Kruska's Gamma testing the association for ranked variables.

Testing Variances - Levene's test is alternate if F and t test assumptions are not met and is used to check the homogeneity of variances across samples.

You may be able to "transform" the data if the raw data does not meet normality assumptions.

The word "transformation" implies that each data point has the same calculation applied to it (including any specification limits when analyzing capability). Data that meets the assumption of normality allows a wider variety of test to be used.

Follow these steps when you believe the data does not meet normality assumptions:

There are other transformation methods such as the Yeo-Johnson which is similar to the Box-Cox but can be used with negative values and zero.

These are more advanced topics of which you should consult a Master Black Belt to ensure the most appropriate transformation is used depending on the distribution of the data.