Using the process shown an example of yield to sigma relationships are calculated:

The probability of having a defect in Process 1:

Z-table for 0.20 is approximately 0.84 sigma. This is considered a long term sigma value.

z-table for 0.525 is less than 0 sigma, long term which indicates over half will be defective.

A negative sigma value means that most of the process is performing outside your customer's specification range (LSL and USL).

There are a couple commonly used Microsoft Excel functions that convert Defects per Million Opportunities (DPMO) to a process sigma (z-score) and vice versa.

To convert from DPMO to process sigma:

To convert from process sigma to DPMO:

The 1.5 shift is subjective, but some experts use this as conversion from long to short term performance estimates (and vice versa). 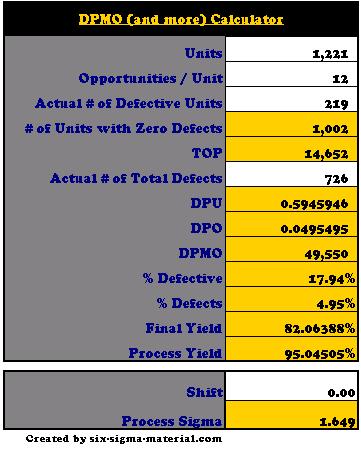 Consider that Z is a standard normal random variable.

Use the Z-table to help solve.